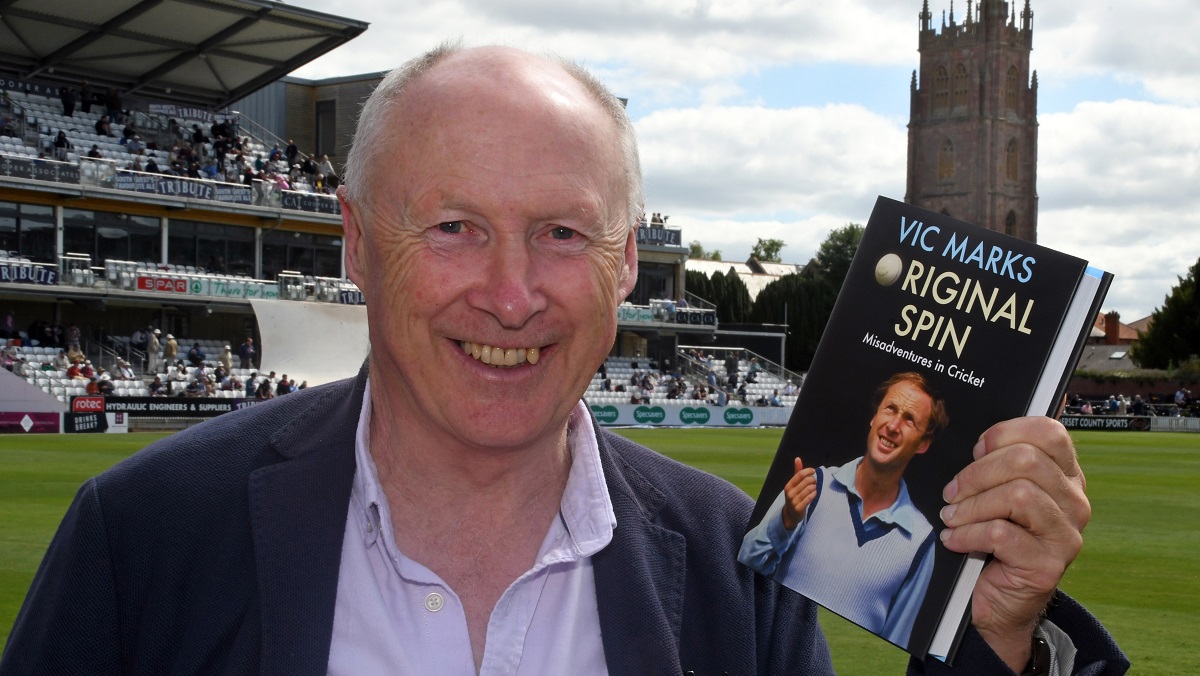 After a distinguished cricketing career, during which he was an integral element of Somerset’s Glory Years side and received international honours, Vic Marks became one of the games most respected journalists and broadcasters.

Who better to talk about the work of David Foot, the much loved cricket writer who passed away in 2021?

A special event in David’s memory took place last year at which Vic joined a number of his media colleagues and the Foot family to remember David and his work.

There was a lovely ceremony at the Cooper Associates County Ground on August 31 last year and it was a great privilege to be there. The family of David Foot had gathered in the press box to unveil a plaque, presented by the Cricket Writers’ Club, remembering the man who “captured the sunshine, sixes and cider of Somerset cricket” and to share some memories of a great friend of Somerset cricket and Somerset’s cricketers.

David was a proud and true west country man, self-effacing to a fault and, despite his protestations, a brilliant journalist, historian and broadcaster. He could have “emigrated” to Fleet Street, even though that has only been the mythical home of the national press for many years now. But he preferred to stay out west. Even so, as a regular writer for the Guardian, David’s work was lauded all around the country.

David wrote and broadcast on so many walks of life, but perhaps cricket was his specialist subject. He was a regular at Taunton for over half a century; he loved cricket, he loved cricketers and he loved words; the west country’s John Arlott.

When I was in the Somerset dressing room about four decades ago we always read his reports eagerly; they would be generous and sympathetic yet always studded with an unexpected detail or insight; the players spoke to him readily since they knew he was utterly trustworthy. He was incapable of writing a dull paragraph.

We could also marvel at his books. Ghosting Viv Richards’ first autobiography was no easy task since Viv was such a hard man to pin down. Once David, the gentlest of men, had to pluck up courage to have some stern words with Viv to ensure a few more hours in his company to complete the book with the deadline approaching fast. He must have completed this formidable task quite brilliantly …and bravely. Not many of us were prepared to confront Viv but in this instance the great man recognised that he was out of order, apologised for not turning up at the agreed time and soon he sat down in front of David and a tape recorder – and a delicious lunch concocted by David’s wife, Anne.

Around the same time David wrote his brilliant biography of Harold Gimblett, which was, in so many ways, decades ahead of its time as a ground-breaking study of sporting anxiety. Gimblett was an heroic figure to the Somerset supporters of my father’s generation, a complex character and another cricketer, who in David’s words “trusted me enough to leave some exceedingly personal tapes containing his most intimate and painful thoughts”.

David may have been a gentle, self-effacing soul but he would not shy away from the difficult topics even though he admits in the 2003 reprint of his Gimblett book that “the task I set myself left me periodically depressed”. His later biography of Wally Hammond confirmed his fearlessness as a writer.

Sometimes I shared a press box with him at Taunton. His arrival would be a source of joy since it guaranteed a fount of wisdom, fine stories and sharp humour. Upon his return home his wife would ask him not about the cricket he had been reporting but whether he had returned from “a good box”, in which the conversation and camaraderie had been uplifting.

Occasionally as I set off as a novice cricket writer he would send me a handwritten note, complimenting me on a recent piece.  There could be no better commendation. Also we might swop notes on our shared experience of growing up in south Somerset, albeit a few decades apart. He was born in East Coker, four miles from my home in Middle Chinnock. Later in life it would cheer me up to appear in the same sports pages as David in the Guardian or Observer, one difference being that he was probably furnishing reports to several other outlets at the same time.

He was a beautiful writer but also a prolific one. In my experience only Tony Cozier from the Caribbean, rivalled him in his ability to deliver so much elegant copy to so many people so quickly and, it always seemed, so effortlessly.

Back at the Cooper Associates County Ground last August once the plaque had been unveiled, we all had a few moments to recall and celebrate David’s life not only as the consummate journalist but as the generous, principled, life-enhancing, mischievous man who brought a smile to all those he encountered.