From the Archive: Lottie's First Century

Somerset has long had a special affiliation with women’s cricket.

The Somerset Women played their first match on May 19th, 1956 at Morlands Athletic Ground in Glastonbury, but it has been in more recent years that Taunton has become something of a focal point for the women’s game.

England Women made their first appearance at the Cooper Associates County Ground in 1997 against South Africa in an ODI and since that day the England team have regularly returned to First Class cricket’s most South Westerly outpost.

However, it is back to 1997 that we travel for this article.

England arrived in Taunton having already won the first of the three ODIs at Bristol just two days previously, and they were keen to wrap up the series. Unfortunately, it was the tourists who came out on top by just two wickets.

However, the match was a memorable one for England’s 17-year-old opener who would eventually go on to become one of the greatest players the women’s game has ever produced.

Charlotte Edwards had made her first England ODI appearance in the match at Bristol and had fallen just five runs short of a debut half century, but she had certainly shown glimpses of her considerable talent.

Just two days later she walked out to the middle for England at Taunton after Karen Smithies had won the toss and elected to bat first.

Edwards then produced a fine display of batting as she reached the first of her nine ODI hundreds from just 115 balls with an innings that included 15 fours.

England posted a total 253 for five from their 50 overs but despite Edwards’ Player of the Match performance, it was South Africa who came out on top.

What does Charlotte remember about the match?

“I remember that it was my first game on Sky Sports,” she said. “I think that as a kid you always want to play on tv and I remember it being the first game where I got to do that. I remember feeling quite overawed by everything that was going on around me as well. To be able to get to play at such a beautiful ground like Taunton was great and it was such a beautiful day. It was the perfect setting for it all.”

“I’d heard so much about the Taunton wicket and everyone was saying that all the batters want to bat there because it’s such a good wicket. Although I was nervous about the tv side of it, I was incredibly excited about playing on one of the best wickets in England. It was just brilliant to be able to do something that I loved doing and I was only 17 at the time so it was all a little bit of a blur. I nearly had to pinch myself because I was just living the dream.

“I still remember that day very fondly. On the day we had a really good crowd and that was probably the first time that I’d played in front of a big crowd and it was just brilliant. Whenever I played at Taunton there was always a really good atmosphere and the Members really support the women’s game.

“Taunton is one of my favourite grounds. It was one of the best wickets you could play on and I had a good record down there. I loved the people and I loved the town. As a person it really suited me and I always love going back there. I was lucky enough to be back there commentating during the summer and it’s still a great venue and one that I always look forward to going back to.” 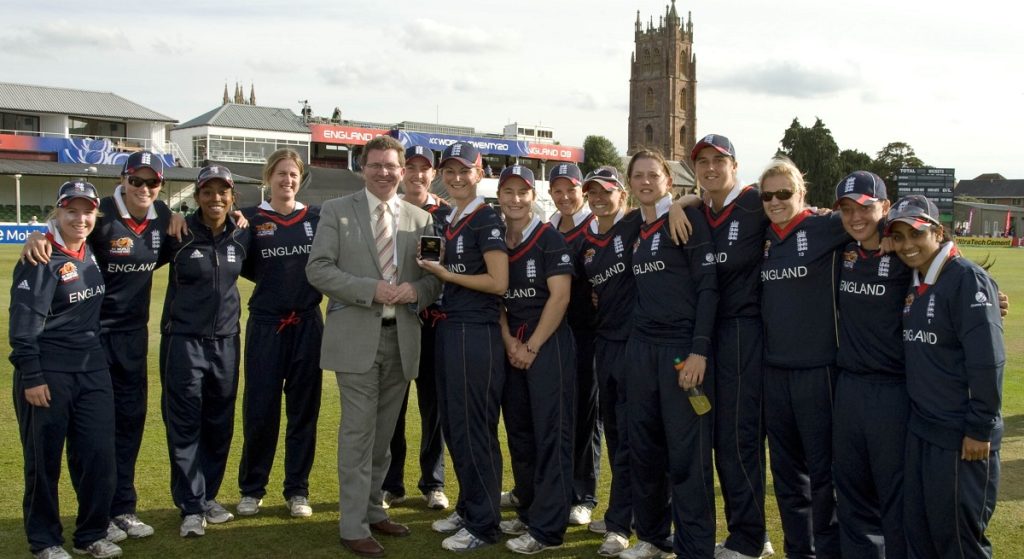 “Your first hundred is always really special and I have this vivid memory of not being able to believe it. Looking back at the images of my reaction now you can see that I actually reacted like a school kid would. I just jumped up and down! I had no idea how I would react and I hadn’t rehearsed anything, so it was just natural. I looked so stupid jumping up and down on the spot, but it’s a day that I’ll never forget. My family were all there and to do it on Sky Sports at one of the most picturesque grounds in the country meant that it was a dream come true.

“I was gutted that we lost that match though. I think that shows what a competitor I am and how much of a team person I was. Although it was my first hundred I was absolutely gutted on the bus on the way back. I remember being so down and everyone was reminding me that I’d got a hundred, but I kept saying that we’d lost the game. It was so disappointing because you always want to score hundreds and play a part in your team’s success, but to score a century and lose is bitterly disappointing. It was a great game for the tv cameras I suppose. So, it was one of the best days of my life until we lost!

“That summer was just incredible. To get my first hundred and then to play at Lord’s and win the series at the home of cricket just topped off what was a very special few weeks for me.

“That summer was mad. I was working at the time and was having to fit everything around that. I remember that I had to get that block of time off work. I was working for Hunts County Bats and I had to ask them for six weeks off work. It was certainly very different to how things were when I finished my career! I think in many ways that made it even more special back then because it was almost something of a novelty. I’d not been on tour with England before and now I was getting on the big bus and playing alongside players that I’d looked up to as I was growing up. I was the happiest girl in the world because I was playing cricket for England with a lot of my heroes.

“I was really luck that my International career started so well with a hundred early on. That set me on my way and made things a lot easier in terms of things like confidence. I couldn’t have dreamed that things would turn out like they did. I still can’t always believe the things that I’ve achieved and I’m very lucky to have been able to have done what I’ve done.”