Grace Scrivens top-scored with an unbeaten 34 to guide Sunrisers to a seven-wicket victory over Western Storm in Group B of the Charlotte Edwards Cup at the Cooper Associates County Ground.

Set 130 to win in 20 overs, the visitors reached their target with 14 deliveries to spare to register their first success since their formation in 2019.

Put into bat, Storm never fully recovered from the loss of early wickets and had to settle for 129-6, Nat Wraith and Sophie Luff making 36 and 31 respectively. The pick of the Sunrisers bowlers, Sonali Patel claimed 2-26, while Katie Wolfe, Kelly Castle and Scrivens all weighed in with a wicket apiece.

Defeat was a chastening experience for a Storm side deprived of England stars Heather Knight and Anya Shrubsole, and the 2019 champions have now suffered four straight defeats in all competitions.

Former Storm players Naomi Dattani and Alice MacLeod gave Sunrisers’ reply the perfect start, adding 39 inside six overs. Both were out driving, Dattani for a 21-ball 22 and Macleod for 13. Building upon the solid foundations afforded them by the openers, the third wicket pair of Scrivens and Mady Villiers combined deft placement and quick running between the wickets to stage a crucial stand of 45 in eight overs.

Danielle Gibson clean bowled Villiers for 36 with an in-swinging yorker to make Sunrisers think again, but Scrivens then set the tempo in an unbeaten alliance of 38 with Amara Carr, who struck the winning boundary in making 18 not out. Demonstrating a maturity beyond her years, Scrivens made 34 from 35 balls and helped herself to a brace of fours and a six. 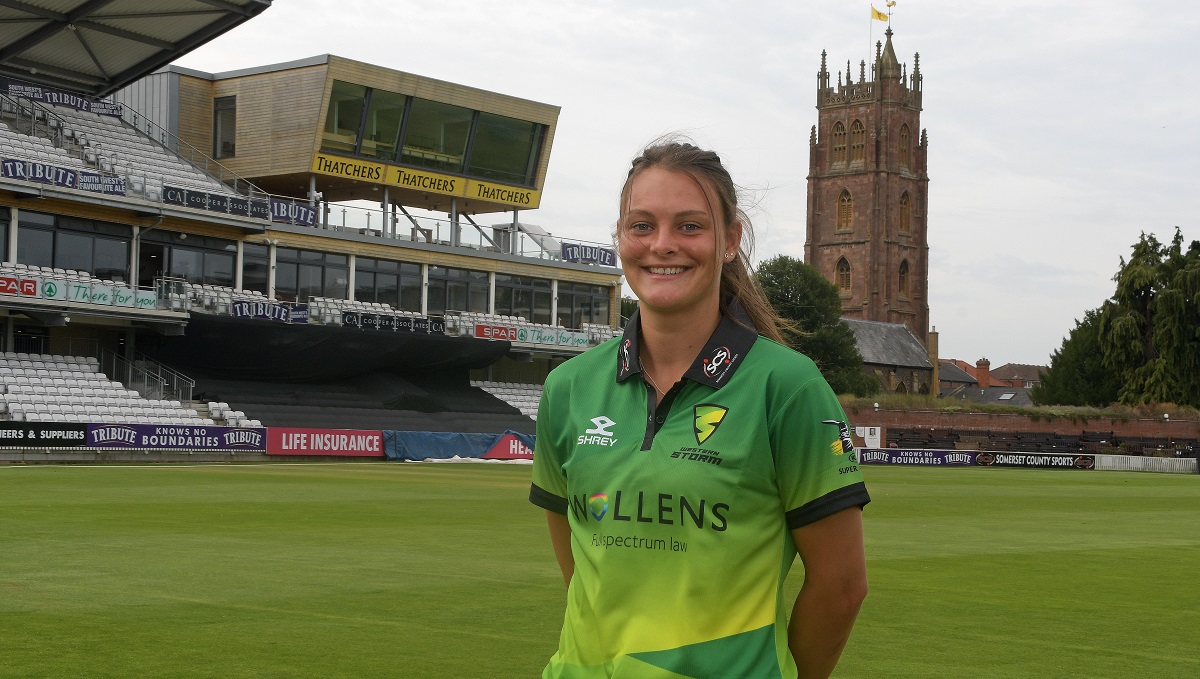 Storm opened their innings brightly enough, but then succumbed to a clatter of wickets as they were reduced to 49-5 inside 12 overs. Patel was rewarded for bowling a full length when removing Fi Morris and Gibson with successive deliveries in the fifth over. Panic appeared to have set in when Georgia Hennessy was run out in a mix-up with Luff, who sent her back and watched her depart for 18.

George and Alex Griffiths then came and went with indecent haste, both dismissed in single figures attempting to play across the line, as Sunrisers took control. Relief for the hosts came in the form of a restorative stand of 42 in 5.2 overs between Luff and Wraith, who found the gaps regularly enough to apply pressure for the first time.

Lured onto the front foot, Luff was stumped by Carr when going well, after which Wraith struck a two sixes and shared in an unbroken alliance of 36 with Lauren Parfitt, who contributed 15 not out. Storm finished strongly, but it proved too little too late.

After the match, Head Coach, Mark O’Leary said: “It’s not the start we were after. We’ve lost the game and we just weren’t good enough today. I think it’s important to take some positives from it and it was great to see Alex Griffiths back playing. She bowled really well today and it was good to see Emily Edgcombe back as well.

“We didn’t get enough partnerships going and weren’t dynamic enough overall. I’m confident that we’ll bounce back quickly and we go again next week.”

Western Storm’s next match is on Sunday July 4th against Thunder in the same competition at Chester Boughton Hall CC, Chester.