Since Somerset County Cricket Club’s inception in 1875, some of the greatest cricketers ever to have graced the field have represented the County.

However, the eternal question is: who would make it into Somerset’s greatest ever county championship team?

We are now giving you the chance to answer that question.

Every Monday for the next few weeks, you will have the opportunity to help select the Club’s greatest ever red-ball XI.

We have compiled a shortlist which will enable you to select our best ever openers, middle order, wicketkeeper, seamers and spinners.

Today we give you the chance to pick the spinner.

Simply select one player from the list provided, and the one who receives the most votes will be selected and announced next week. 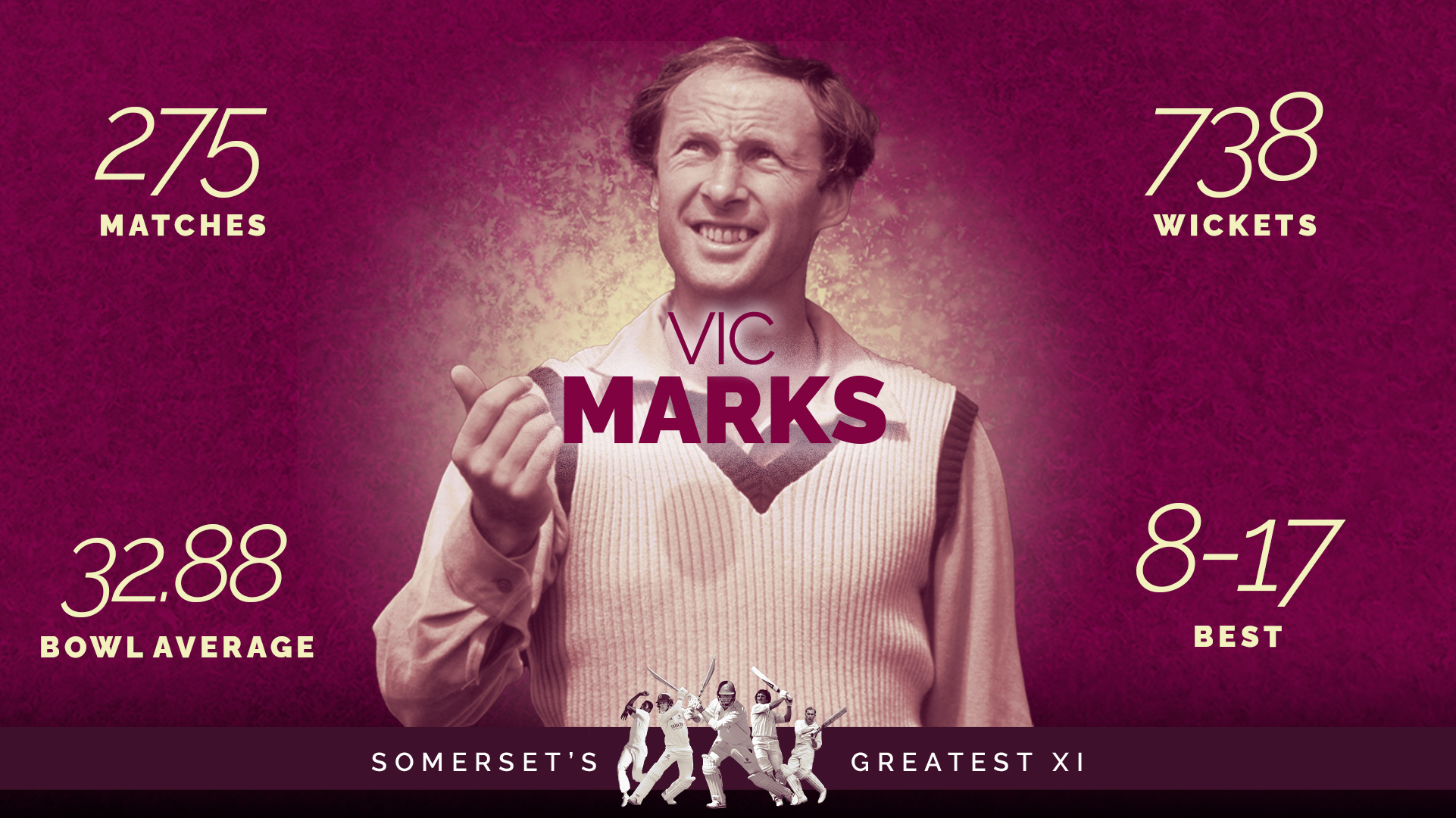 South Somerset farmer’s son Vic Marks made his Somerset debut at the age of 20 in 1975.

Educated at Blundell’s School before moving onto Oxford where he won four blues, Somerset had yet to lift a trophy when he joined the Club.  However, by the time he retired at the end of the 1989 season, Vic had played his part in helping his beloved county to win five one-day trophies and was a key member of the Glory Year’s team.

In his 275 First Class matches for Somerset he scored almost 10,000 runs at an average of 30.53. During his career he hit four centuries, with a best of 134 against Worcestershire in 1984, and he passed 1000 First Class runs twice. Vic also claimed 738 wickets with his off spin at a cost of just less than 33 runs per wicket and achieved his career best figures of eight for 17 against Lancashire at Bath in 1985.  His best season was in 1984 when he scored 1262 runs and took 84 wickets in First Class cricket.

Vic captained Somerset for the last part of the 1988 season and also for 1989 before retiring and becoming a respected journalist and broadcaster.

The summer of 1992 saw England’s batters utterly bamboozled by Pakistan’s Mushtaq Ahmed, so it was with great delight and expectation that Somerset Members and supporters welcomed the news that he had signed a three-year deal with the County.

The World Cup winner was a constant threat to opposing batters with his varied mix of leg-spinners, googlies, top-spinners, flippers and quicker balls.

His best season for the County was in 1995, when he claimed 95 red-ball wickets.

He was also an underrated batsman, who once sored 90 for the Club. His enthusiastic and frequent appeals will always be fondly remembered by the Taunton faithful.

J.C.(Jack) White was born in Holford, on the northern side of the Quantocks in 1891 and died at Combe Florey on the southern side in 1961.

Born in Kidderminster in 1864, Edwin James “Ted” Tyler began his career at Worcestershire before joining Somerset in 1891.

The left-armer relied heavily on his precise accuracy with the ball. His immaculate length and consistency would often wear a definite spot on the wicket, which he would then exploit.

Tyler would often open the bowling for Somerset, and during his 16 seasons he claimed 864 wickets at an average of 22.34 with a best of 10 for 49 against Surrey at Taunton in 1895.

He took 15 wickets in a match on two occasions, and managed 14 wickets three times.

Former Somerset captain Brian Langford holds two records that are unlikely to ever be beaten.

Between 1953, when he burst onto the county scene, and 1974 the off spinner appeared in 504 First Class matches for Somerset, which was no mean feat when you take into account he was undertaking National Service for two of those seasons.

Brian’s other claim to fame is that in the first season of the 40-over John Player League against Essex at Yeovil he bowled his allotted eight overs without conceding a run.

Although he was born in  Birmingham, at the age of four Brian Langford moved to Bridgwater where he attended Dr Morgan’s School and played for Bridgwater Cricket Club as an opening batsman and seamer.

Somerset recognized his talents and Brian was invited for a trial where he quickly changed his style to develop as an off spinner.

His entry into First Class cricket cannot have been more dramatic. He was taken to Bath in 1953 to carry out the twelfth man duties only to find himself called into the team at the last minute by skipper Harold Stephenson. The teenager didn’t disappoint and in three matches at the Rec he took 26 wickets, including 14 in the game against Kent.

Brain’s best bowling came in 1958 when he took nine for 26 against Lancashire at Weston-super-Mare and in that same season he took 116 First Class wickets – one of the five times he topped the 100 mark in a season.

Brian captained Somerset between 1969 and 1971 before handing over the reins to Brian Close.

Jack successfully progressed through the Somerset Age Group Pathway before making his debut for the County against South Africa in 2012.

Since that day, the left armer has gone on to take over 240 wickets for the Club, and his consistently outstanding performances for Somerset have seen him receive recognition at International level. Following the recent series, Jack now has 63 Test wickets from 17 matches at an average of 31.12. He is also England’s all-time leading Test wicket-taker in Sri Lanka.

In total, Jack has claimed 243 First Class wickets for the County at an average of 24.34 with a best of eight for 85.

Next week we will be asking you to pick our greatest seamers.

Don’t miss out on the chance to have your say on who are the best Somerset players of all time!