Rodriguez struck 60 from 27 balls and dominated a match-winning third-wicket stand of 79 in 45 balls with Hollie Armitage as Diamonds posted 104 for four in 10 overs after being put into bat.

Victorious in their opening nine games and desperate to retain their 100 per cent record, Storm refused to go down without a fight. Fran Wilson and Sophie Luff took the chase down to the final ball in a spirited unbroken fourth-wicket stand of 76, only for experienced seamer Beth Langston to hold her nerve in a thrilling finale.

Internationals Lauren Winfield and Alyssa Healy afforded Diamonds’ innings crucial early momentum in a first over which yielded 19 runs. However, England seamer Freya Davies effected a turnaround in fortunes, removing both in the space of five balls in the second over to reduce Diamonds to 21 for two. England’s Winfield skied a top-edged pull to wicketkeeper Rachel Priest, who then demonstrated safe hands when Australia’s Healy was hurried in the act of driving.

Rodriguez and Armitage sought to redress the balance, staging a revitalising partnership for the third wicket. They advanced the total to a handy 55 for two at halfway.

Rodriguez was threatening to carry Diamonds to a truly imposing total when she finally fluffed her lines in the face of nagging line and length from Davies, miss-timing a drive and holing out to mid-off in the final over.

The only Storm bowler to escape punishment, Davies finished with admirable figures of three for seven off two overs, frustrating Yorkshire’s attempts to accelerate at the death. 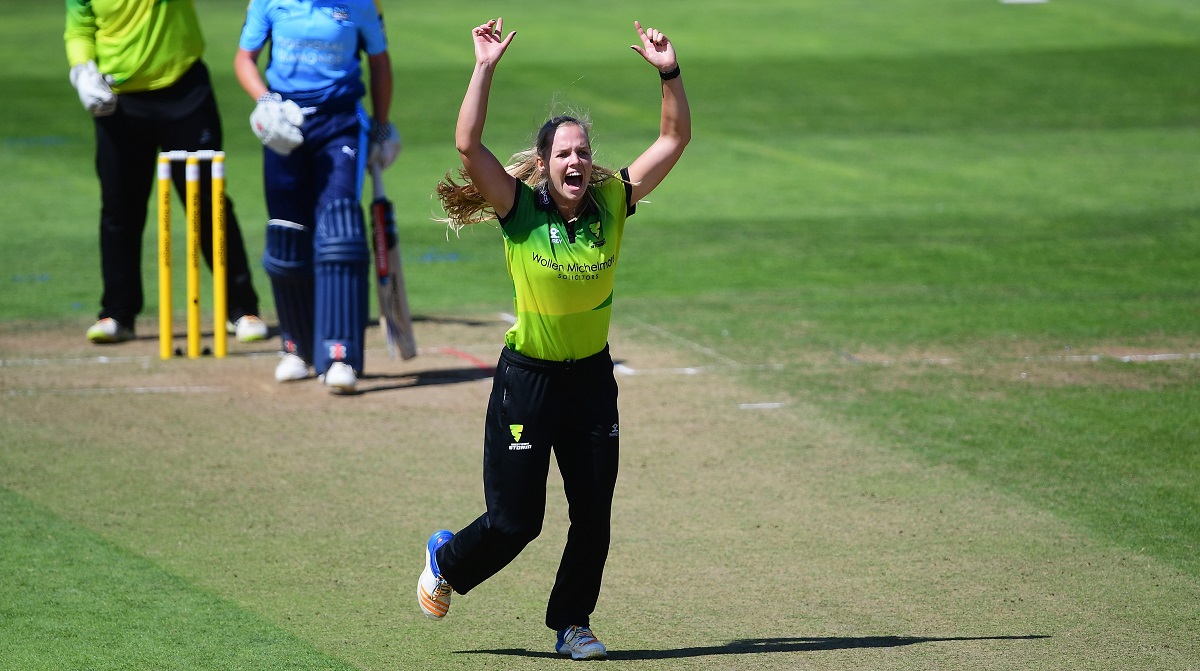 Storm’s reply was halted in its tracks as key batters Priest, Smriti Mandhana and Heather Knight all departed inside five overs, Diamonds reducing the hosts to 23 for three.

Charged with the unenviable task of rebuilding an innings that had stalled in it’s infancy, Wilson and Luff made a decent fist of chasing. Throwing caution to the wind, the fourth wicket pair combined feverish running between the wickets and clean hitting to sow seeds of doubt in Yorkshire minds.

Needing 14 runs off the final over, Storm hopes were revived when Langston no-balled twice. However, the home side were unable to take advantage of the subsequent free hits and came up agonislingly short at the death.

Wilson hit an unbeaten 45 from 20 balls, while Somerset-born Luff finished on 31 not out from 18 deliveries.

At the end of the match Storm Head Coach, Trevor Griffin said: “We set our sights on winning ten out of ten, but it wasn’t to be. We may have came up short in a really close finish, but we showed our character and spirit to take it down to the final ball. It’s a shame that Fran and Sophie couldn’t quite get us over the line in what was a thrilling match. We’ve been involved in some close finishes this season and we’re disappointed not to have come out on top this time.

“We won’t dwell on this game for long. We’re in the final and our focus has to be on winning the title on Sunday. We need one more big effort from everyone and, hopefully we will be celebrating at the end of Finals Day.

“I’d like to thank our wonderful supporters. We’ve made a home at Taunton for the last four years and they have backed us in each and every game, and made playing here feel very special. It would be fitting were we to lift the trophy for them at Hove.”