Somerset make the trip to Edgbaston for 2022 Vitality Blast Finals Day this weekend.

Somerset take on Hampshire Hawks in the second semi-final at 2:30pm on Saturday.

The first semi-final between Yorkshire Vikings and Lancashire Lightning will begin at 11am.

The winning semi-finalists will then meet in the final which is due to begin at 6:45pm.

The two sides have faced each other 26 times in T20 cricket. Somerset have won on 14 of the matches, Hampshire have won eight times, one game was tied and three matches have been abandoned.

The highest team total in the series for Somerset is 220 for four at Taunton in 2010, while for Hampshire 216 for five in the same game.

The highest individual innings for Somerset is 102 not out by Babar Azam at the Ageas Bowl in 2019, while for Hampshire it is 85 by Tom Alsop in 2009 at the same venue.

The best bowling for Somerset is five for 15 by Jerome Taylor at the Cooper Associates County Ground in 2018, while for Hampshire it is five for 17 by Liam Dawson at at the Ageas Bowl in 2016.

The two sides met at the semi-final stage last year. It was a dramatic game that Somerset won by two wickets.

Somerset won the toss and elected to bowl.

Joe Weatherley top scored for the Hawks with 71 from 50 balls as Hampshire posted a total of 150 all out from their 20 overs. Josh Davey was the pick of the bowlers, claiming four for 34 from his four overs.

Somerset slumped to 34 for five, but Tom Abell (50 from 35 balls) and Ben Green (35 from 18) turned the tide of the match and it was left to Craig Overton and Josh Davey to see Somerset over the line with just two balls to spare.

Ahead of the semi-final, Head Coach, Jason Kerr said: “We weren’t at our best at Finals Day last year, but we still made it to the final. We’re taking a lot of confidence into the game after the way we’ve played in the last few matches. We now have to execute our skills under the added pressure of Finals Day.”

Rilee Rossouw has scored 600 runs in this year’s Vitality Blast. That’s more than any other Somerset player in a single season. He hopes to be able to add to that total this weekend. “I’m very thankful for the amount of runs I’ve scored this season for Somerset,” he said. “The job isn’t done yet though and we hopefully have two more matches to go. I want to be the leading run scorer in the Vitality Blast this season, so hopefully Saturday can be my day, but if it’s not my day and we win, I’ll definitely take that!

“It’s knockout cricket so there will be extra pressure and Hampshire are on a good run, but we’ve got some good momentum after our performance against Derbyshire. Both sides will start on 0/0, so we’ll see how things go.

“Somerset have welcomed me with open arms this year and I’ve really enjoyed playing here.”

“It was disappointing not to win last year, but we were quite inexperienced. We’ve gained experience since then by playing regularly and gaining a greater understanding of our roles. Finals Day is different to any other day in the calendar. It’s tough on your body and it’s tough mentally, but hopefully we can draw on last year’s experience. We feel much more complete as a side this season.

“Our supporters have been absolutely awesome again this year and hopefully we can give them something to cheer on Saturday.”

If you are traveling to Vitality Blast Finals Day, everything you need to know is outlined in the following comprehensive spectator guide:

2022 Head-to-Head: The two sides met twice in the group stage of this year’s competition and it is currently one victory each.

The first match was at the Ageas Bowl in May when Somerset won by four wickets.

After winning the toss and electing to field, the visitors restricted Hampshire to 123. Josh Davey was the pick of the bowlers with three for 21.

Tom Lammonby top scored for Somerset with 33 from 22 balls as they reached their target for the loss of six wickets from 15.5 overs.

In June’s return fixture at the Cooper Associates County Ground it was the Hawks who triumphed by 14 runs.

Somerset won the toss and elected to bat, but 129 from James Vince saw the visitors post a total of 208 for five. Somerset seemed well placed to do the double over Hampshire with both Rilee Rossouw and Tom Banton making half centuries, but a number of late wickets fell and the hosts finished on 194 for nine.

The story of their Blast: Hampshire finished fourth in the South Group, claiming nine wins from their 14 matches.

At the quarter-final stage, Hampshire dispatched Birmingham Bears by 104 runs at Edgbaston. Ben McDermott made 61 as the Hawks made 186 for six from their allotted overs.

Their bowlers then ripped through the hosts as the Bears were all out for just 82 in the 14th over. James Fuller finished with four for 17. 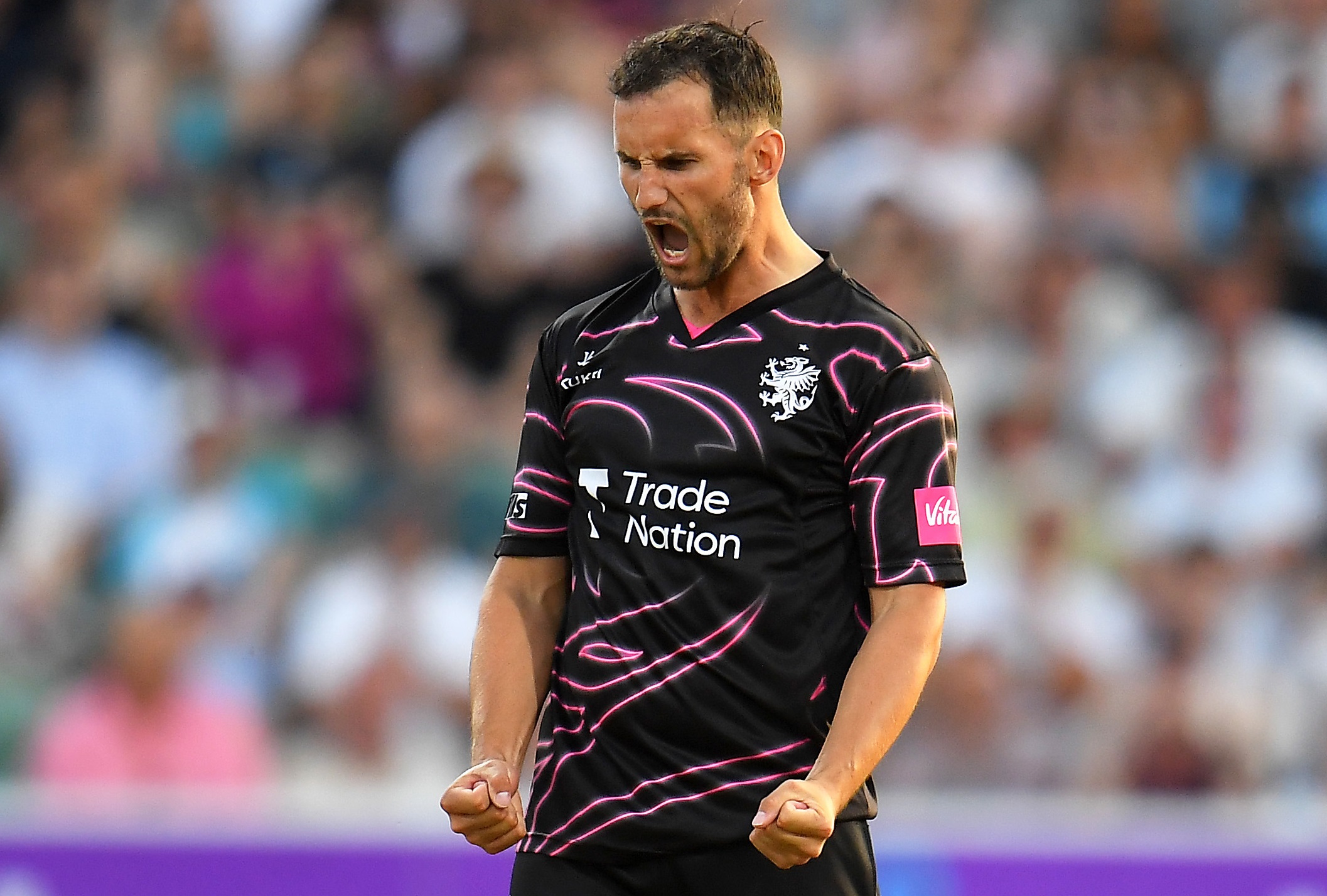 The story of their Blast: The Vikings finished fourth in the North Group after collecting 15 points from their 14 fixtures. They pipped Notts to the final qualifying spot on net run rate.

In a dramatic quarter-final Yorkshire overcame Surrey by just one run.

After being put in, Yorkshire made 160 for five thanks to 62 from Tom Kohler-Cadmore.

A rapid 40 from Jamie Overton looked to have taken Surrey to their total but two wickets in the final over halted their progress as the visitors claimed a dramatic win.

The story of their Blast: Lancashire finished second in the North Group, claiming 18 points from their 14 games. They missed out on top spot on net run rate.

They beat Essex by seven wickets in the quarter-final. Essex won the toss and elected to bat.

Michael Pepper top scored for the visitors with 36 from 28 balls as Essex reached 161 for five from their 20 overs.

Steven Croft made 76 not out from 48 balls and there was also a half century from Dane Vilas as Lancashire chased down the total with 26 balls remaining.

Stumpy will once again be running in the mascot race on the day.

You can support Stumpy during the race by donating £5 to the Professional Cricketers’ Trust to be in with a chance of winning a pair of premium 2023 Finals Day tickets.

On Saturday, mascots from up and down the country will be limbering up to take part in the prestigious annual race with a difference: they will be raising money to support those who need it most.

Getting involved is simple. If you want to cheer on Somerset’s very own Stumpy, just text STUMPY to 84903 and you will automatically donate £5 (not including the cost of one text message at your standard network rate).

In addition, neutral fans or those with children who attend the ECB’s All Stars programme can support Twinkle, their official mascot, by texting TWINKLE to 84903.

Participants may enter up to eight times and the winner will be contacted by midday on Tuesday 19 July.

The Trust was created to support the health and wellbeing of PCA members who have entertained cricket supporters over the years on the pitch for when they are in desperate need for help.

Somerset’s next match begins on Tuesday July 19th when we take on Yorkshire at the Cooper Associates County Ground in the LV= Insurance County Championship.

Tickets for this match are now on sale.