Ben pleased to have joined the T20 five-for club.

Somerset made it four wins out of five in the 2022 Vitality Blast when we beat Glamorgan at the Cooper Associates County Ground on Friday.

It was a special night for everyone who witnessed the impressive nine-wicket win, but it was an especially memorable occasion for one man in particular.

Ben Green took five for 29 to become only the seventh Somerset player to claim a five-wicket haul in T20 cricket.

“I’m overwhelmed,” he said. “I really wanted to get on the Club’s honours board this year by getting a hundred or five wickets, so it was really nice to be able to do that on Friday. It was a bit of a surprise to have done that in a T20 but that’s just the way it goes sometimes.

“I’ve been reflecting on it over the last couple of days and T20 cricket is a game where you never quite know what’s going to happen. Everything seemed to go in my favour on Friday and I’m pleased that it did.

“I was incredibly happy to get five, but I’m not sure anyone else knew I’d got that many! It was an incredibly proud moment for me, and it was nice because all my family and friends were there to see it. It’s always nice to get one over on your local rivals and for us to bounce back so well from the Sussex defeat was important. We’d played so well in the first few fixtures that we weren’t too worried after that loss. Sussex played well that night, but we know that if we play like we did in those opening games we are in with a good chance.”

Ben is impressed by the balance of the Vitality Blast squad this season.

“We’ve got an amazing mix this year,” he said. “There’s some serious young talent, some explosive batters, some experienced players and some excellent bowlers too. At this stage it seems like the side is coming together well and we’ve built on what we achieved last year.

“Everyone is giving absolutely everything for this squad with the bat and the ball and we pride ourselves on being one of the best fielding sides in the country, if not the best. We’re always trying to influence the game and we’re playing for each other. Hopefully, we can go the distance this year.

“Momentum is huge, especially in the Blast because the games come thick and fast. Two more wins this week would put us in a really good position in the group.”

Ben was also quick to give a mention to the Somerset Members and supporters who were at the Cooper Associates County Ground on Friday night.

“It was great having so many people in the ground and it was fantastic to see how well everyone reacted to our boys smacking them out of the ground and taking wickets.”

England on top after day three 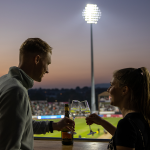 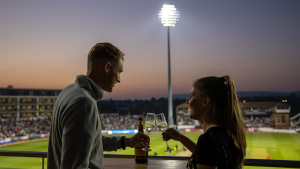