Somerset will be looking to make it five out of five when we host Hampshire in the Royal London One-Day Cup at the Cooper Associates County Ground, Taunton tomorrow (Wednesday) with play due to get underway at 11am.

Somerset have won all four of our games in the competition so far and top the South Group table with eight points, while Hampshire have won two and are fourth.

Unlike in previous seasons, when the top four from the North and South Groups qualified for quarter finals, this year it’s only the top three who will stay alive in the competition.

The teams who win the groups will be rewarded by direct passage to a home semi-final on June 16 and 17. Earlier that week, on Tuesday June 13, there will be two play-offs for the other two semi-final places with the team finishing second in the North Group at home to the team finishing third in the South Group, and vice versa.

How can I stay up to date?

In addition a report on the day’s play along with quotes will be posted after the close.

The only meeting between the two sides in the Royal London One-Day Cup was on 22nd August 2016 at the Ageas Bowl when Somerset won by five runs.

After opting to bat first Somerset made 250 for nine from their 50 overs and that was thanks in no small part to an opening partnership of 108 between Jim Allenby and Mahela Jayawardene.

Hampshire replied with 245 all out off 50 overs. Tim Groenewald was Somerset’s most successful bowled with three for 56, while there were two wickets each for Lewis Gregory, Roelof van der Merwe and Max Waller.

Views from the Dressing Room

Director of Cricket Matt Maynard said: “We have played some very good cricket in the Royal London One-Day Cup and I’ve been delighted all the way through with the way that we have gone about it.  Josh Davey and Craig Overton have made a really potent opening bowling partnership and then we have mixed and matched a little bit, depending on what the surface is and the attitude among the whole staff is brilliant.

“It was a good toss to win last Friday but the way that Jim Allenby and Dean Elgar posted that partnership was brilliant and that got us into a position with wickets in hand where we could really accelerate.

“When we fielded, the way the lads went about it was really good because it was windy and there weren’t many in the crowd so they created their own atmosphere out on the field.

“We got out of jail in the first game with a brilliant knock from Roelof van der Merwe and then after that Dean Elgar got a century down in Sussex, Peter Trego got a hundred against Kent and in the last match it was Jim so we are really pleased. Hildy has also come in and played a couple of really good knocks and the one at Cardiff was really something special to see.”

Matt added: “There is a lot to play for with the top of the table team having a home semi-final this year and that’s the spot that we want!”

Please note that the large temporary stand in the Priory Bridge Road side of the Ground will NOT be in use for this fixture.

Everything you need to know

All the information that you need can be found in our comprehensive match-day information page. This covers everything from planning your journey to where you eat when you get here.

Our Official Health Partner, Nuffield Health, will be at the match offering supporters giveaways plus the chance to win some outstanding prizes.

In addition to free promotional items, supporters could win a free Nuffield Health membership for a month by taking part in their Kettlebell Challenge whilst the winner of the Kids Balance Challenge will win a free month of swimming for their family.

Somerset’s next match in the Royal London One-Day Cup is on Friday when we travel to the Brightside Ground, Bristol to take on Gloucestershire.

Our next home match in the competition is on Sunday when we welcome Essex to the Cooper Associates County Ground.  Tickets for this match are still available and can be purchased by clicking here 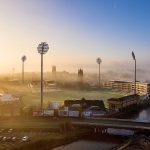